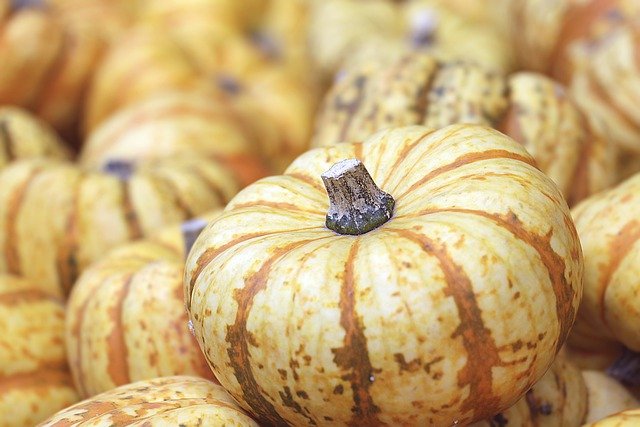 Delicata squash is a variety of winter squash. It is oblong and has a pale-yellow skin with green and orange stripes. The color has no bearing on the ripeness. The interior is light orange and resembles the flesh of butternut squash.

Delicata squash also goes by the names peanut squash, Bohemian squash or sweet potato squash. It is harvested late in the season.

A seedsman introduced delicata in the United States in 1894. It was never widely grown, because it was susceptible to mildew diseases. Plants often had a low yield, and the squash had a short shelf life. It fell out of favor during the Great Depression and nearly disappeared from the marketplace.

In the early 2000s, a group at Cornell University’s Department of Plant Breeding bred a non-hybrid, open-pollinated variety of delicata squash that was resistant to most squash diseases. Cornell’s Bush Delicata is now the primary commercial cultivar.

I was given a packet of delicata seeds this spring. The variety wasn’t mentioned, but the plants did well and produced an abundance of squash.

What sets delicata apart from other winter squash is its thin, edible skin. One of the simplest ways to fix delicata squash is to cut it in half, scoop out the seeds and slice in 1-inch segments. The slices are placed on a baking sheet and drizzled with oil and sprinkled with salt and roasted in the oven. Roasting brings out the natural sweetness.

Another way to prepare the squash is to stuff it with a filling. That is the way I chose to prepare several delicatas last week.

Delicata squash are available now at local farmers markets. Delicata has a shorter storage life than most winter squash. The whole squash will keep at room temperature in a cool, dark place for several weeks. Once it has been cut open or cooked, it will keep in the fridge for up to four days or in the freezer for three months.

Last week, I tried a recipe that was a twist on a classic pasta dish. Delicata squash were stuffed with a creamy bechamel sauce. It was easy and delicious.

In a bowl, mix the milk, spinach, sage, thyme, fontina and mozzarella. Stir in garlic, red pepper flakes and salt and pepper to taste.

Place the squash in a baking dish. Divide the milk/cheese mix among the squash cavities. Top with provolone cheese slices and sprinkle with Parmesan. Cover the squash with foil.

Bake the squash for 30 minutes. Remove the foil and bake an additional 15 minutes until squash is tender and cheese is golden brown.

Note: You can use a 4-cheese blend of fontina, mozzarella, provolone and Parmesan. I would suggest using about 1 cup in the sauce.